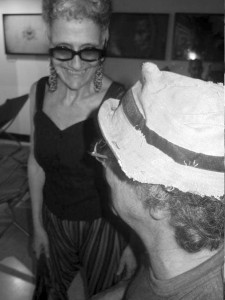 Filled with equal amounts of hope and mistrust, I sat at the Thapae Gate McDonald’s awaiting the arrival of Dennis the Hand Reader. He’d come highly recommended by a Frenchman called Richard whom I’d met the day before at the cheap and cheerful Ming Kwan veg restaurant. Not exactly enough time to determine the veracity of Richard’s tips on voyants, but enough to sense his kind and generous nature. Besides, what did I have to lose except 500 baht?

I have a love-hate relationship with all the psychics, fortune-tellers, astrologers, readers of palms/tarot cards/I Ching and various other “seers” I’ve consulted over the years. On one hand I desperately hope someone will “see” the real me and help me unravel my psychic tangles so I can finally become that fabulous person so many of these folks have described in our readings. On the other hand, very few of the amazing traits and positive outcomes they’ve predicted ever materialized. So is it me not living up to my potential or are they all flattering charlatans?

The bland energy in the empty restaurant shifted noticeably when an older man dressed in a floppy dark blue T-shirt, well worn khaki trousers and sporting a frayed baseball cap over his thick grayish curls strode in precisely at the scheduled 3 p.m. He maintained a nonstop patter while we figured out where to sit—downstairs, upstairs, inside, outside. After 10 minutes of trying out chairs like Goldilocks, we finally faced each other at the only outside table surrounded by greenery and quietude. ‘This guy’s weird, but good weird,’ I thought to myself.

I assumed ‘hand reader’ was a glorified euphemism for palm reader, but once ensconced, Dennis asked to see the backs of my hands. Huh? No soothsayer’d ever studied that part of my anatomy before.

“So you’re right handed,” he pronounced after a brief perusal of my outstretched hands.
“Uh, no,” I replied wondering what I’d let myself in for if he couldn’t even determine my most basic characteristics.
“Are you ambidextrous?” he asked.
“Not in writing but in other things,” I explained.
“Oh, that makes it a bit rougher,” he muttered. “We’ll call the left one dominant and look at that first.”

As if these first questions somehow helped start up his psychic engine, Dennis seemed to shift gears and suddenly went warp drive into another persona. He began a rapid-fire and astonishingly accurate character analysis based entirely on examining the knots, curves, and presentation of my 10 fingers. He minutely described their interrelationships on each hand and noted the significance of the differences/similarities between the left and right fingers.

Before even asking me to turn my hands so he could look at my palms and the inside of the fingers, Dennis had already sussed my very strong willpower and how it can overwhelm people. One left finger angles toward being artistic while the others have strongly held beliefs based on professionalism and scholarship. All four fingers are highly independent, though three work together and the artistic creative one stands apart.

I was mesmerized. He told me to turn my hands the other way around. Thank goodness I’d brought along a digital recorder because taking notes was out of the question. Even had I been able to use my left hand to write—an impossibility anyhow—no way could I have captured the essence of his nonstop descriptive characterizations. I was a precocious kid, wise beyond my years (true). I’m a fixer in the healing sense of the word (many psychics have said this). I’m a bodyguard, a protector. I help people.

“But I’m so independent, I don’t often want to work with people.”
“All gifts can be used or not. You could be the greatest musician in the world who doesn’t play music. Your power is not what you want to use any more. You want to use intuition, serendipity, spontaneity. They’re your gift because right now they’re wide open to learn. Use them and you have the whole world ahead of you, no restrictions, no roadblocks.”

And so it went for a fast and furious 50 or so minutes during which Dennis really didn’t want to hear much from me though I kept wanting to chip in my two cent’s worth. I realize now my long explanations were breaking his rapier-like concentration. At some point he asked me to give him three questions which was my chance to know how all this fit into my future. By then I felt almost too overwhelmed and exhausted to frame three questions. I wanted to ask everything and nothing simultaneously. After being “seen” at such a profound core level, what’s to ask?

I mumbled something about how to harness all the passion personified in one of the left fingers. Dennis regaled me with a tale of a TV personality called Caesar who calms barking dogs by using other dogs to set the example. But given the difficulty of finding my own personal behavior modification trainer, he suggested forcing myself to be an edge person.

“But people look at me and think I am an edge person,” I countered.
“An edge person is where you put yourself in an uncomfortable place. It’s not the same as being edgy, which you are.”

In the course of that conversation another question arose. Dennis predicted an utterly implausible outcome which I scoffed at.

“You asked me to see your future,” he retorted. The future doesn’t make sense.” For once someone wouldn’t give me the last word!

We talked a bit about California where we both grew up. I said he reminded me a famous hippy from the 60s but neither of us could remember the guy’s name. (Only afterwards did I realize it was the hipster comedian Wavy Gravy who founded the Hog Farm collective and MC’d at Woodstock.)

I left Dennis feeling illuminated, inspired, comforted and—for the first time in ages—able to act on the information I’d received in a reading. That evening I submitted an idea to the people selecting participants for the first meeting of Bombyx Stories, an offshoot of the highly successful Bangkok Poetry which meets every six weeks at Opposite (across the alley from WTF on Sukhumvit 51). Bombyx Stories is about telling an unscripted story which can but doesn’t necessarily have to follow the theme of the event. It involves standing up and talking without notes in a hopefully interesting and humorous manner about a seminal event in your life. The audiences at Bangkok Poetry and the one unofficial storytelling event held a few months ago are large and mainly way younger and feistier than me.

Normally I’d terrify myself out of even submitting a story idea and running the risk of being one of the eight people accepted. However, Dennis says I’ve got a strong voice in my little finger, so if I get chosen, I say bring it on!

Jennifer Gampell is a Bangkok-based journalist who writes for publications all over the globe. See more at gampell.com

Dennis lives in Siem Reap, Cambodia now. His phone number is 093783267. Please call or text to make an appointment or email [email protected]
Note: after many years of reading hands for free, Dennis now asks for a $25 fee to support his coffee habit and hat collection.

Now available at Amazon.com!
Travels of a Palmreader 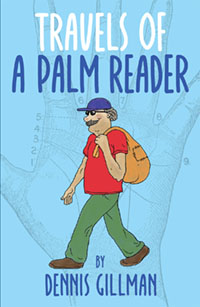